You are here: Home / Homebrew Recipes / A Tale of Two Saisons
FTC Disclosure: xBREWx.com is part of the Amazon Associates affiliate program, as well affiliate programs from other companies. That means if you purchase a product through links on my website, I earn a commission. I strive to make all my reviews honest, because that's the type of content I enjoy reading.

A few months ago while visiting my grandfather, I noticed that all his grapes were going to waste. He told me that he was going to make wine with them like he’s been doing for the past 2-3 years, but this year he just couldn’t find the time. Busy guy I guess.

So I got the idea that I wanted to brew a beer with them. After searching for styles that would fit grapes (I found none), I decided that a saison would be a light tasting beer that could benefit from some extra simple sugar. I figured it would just dry out any regular saison recipe, and since I would be using white grapes, I might also get some white wine influence on the beer.

But just about two weeks before that I had purchased an upright 22 cubic feet freezer I wanted to turn into a double decker fermenter. I thought well, if I’m cranking up the temp for this saison, I might as well ferment two at once.

So I decided to brew a “regular” saison recipe to see if I could actually do it. So far, most of my homebrew has been focused on making something new and exciting.

I searched a bit online and found that BYO’s Mike’s Best Saison was quite a bit different from my grape saison recipe, so I’d try that one.

You might notice that I’m using American 2 row instead of Pilsner malt. Everyone told me this. Honestly, I didn’t make this recipe up. I think I found it somewhere, originally brewed with a different saison yeast, but now I can’t remember where.

Anyway, I wanted to make the recipe as simple as possible to see if I could get the light grape or white wine flavors to come through.

I also didn’t own a scale at this time, so just chucked in all the grapes I had. It was about a 1-2 inch layer at the bottom of a 6.5 gallon carboy.

Due to the amount of grapes I was using, I thought alcohol extraction would introduce too much high ABV alcohol to the mix. I also didn’t want to boil the grapes and create pectin, maybe causing beer haze.

So I just washed the grapes thoroughly, soaked them in Starsan for 30 minutes, and froze them for 3 weeks (not necessary). There’s no obvious beer infection, so it seems to have worked. I was kind of hoping for a crazy wild yeast to surprise me and make a funky Belgian saison, but that didn’t happen.

Pretty basic fermentation – no surprises there. I didn’t have a target final gravity so just waited til it stopped fermenting. The grapes were pretty mushy and flavorless coming out, so the yeast definitely snacked on those in the carboy.

This was also my first kegged beer...

Initial tasting brought a few obvious things to my attention. Using the grapes, at least the way I used them (crushed, with skin).

The first pours were very musty tasting. This may be in part due to yeast and other sediment at the bottom of the keg, as well as my poor carbonation adjustment. But I’m positive the mustiness came from the grapes.

Also, way too much lemon. Way too much. 1 lemon or no lemons would probably suffice. The lemon was a last minute idea, and I probably could have left it out. If you want to brew a lemon beer, start with 1 whole lemon for 5 gallons and work up from there if necessary.

The beer in general is fine. There are some very light white wine characteristics, which are nice, but the base beer is very 1 dimensional. There is also a fruity quality to the beer, which I’m not a big fan of.

However, it pours a wonderful billowy head, and is easy drinking. It’s super clear, and as the lemon fades with time, becoming a better beer overall.

Changes For Next Time

Next time I would like to try it with a Pilsner malt. I would not add any lemon. I would also ferment first, then do a secondary on grapes. I don’t think the beer was dry enough, and I wonder if the yeast eating the grapes simple sugars (they were very ripe) first, meant that they didn’t consume all the maltose as intended.

If it still wasn’t dry enough, I might add some champagne yeast to bring that FG down further.

I used Wyeast 3724 as directed by the recipe, and fermented at 75 degrees for about two weeks. I read on the Wyeast website that you should ferment this at 90 degrees (or higher?) for full attenuation.

They were right. I’m surprised this wasn’t noted on the recipe, as I didn’t get anywhere near 1.010. I read somewhere (can’t find it now) that someone used 3711 to finish off what 3724 couldn’t so I made a starter with 3711 and pitched that to bring it down as far as I could.

This was a much darker, fuller bodied saison than my lemon grape experiment. It is also very clear, and has great head formation (but poor head retention).

Unfortunately, despite my attempts to get a dry, spicy saison like my favorite Sneak Attack from 21st Amendment, this one still came out a little “round” on the edges. I really don’t know what I did this time.

It’s not a bad beer. The spiciness associated with a lot of saisons comes through pretty well in the nose. There is some astringency and tart flavor that I think I would appreciate more had I not overdosed my other one with lemon.

I think my biggest issue with this beer is that the pilsner malt taste come through too sweet. I know that canned corn is often used to describe a poorly made pilsner, so I wonder if this is the corn that I’m tasting. It doesn’t remind me of corn. It’s just a malty sweetness I associate with not-so-dry pilsners.

Changes for next time

I will definitely ferment this at a full 90 degrees, and add more hops, both bittering and aroma.

Here’s a picture of the beers side by side. Crystal clear right? 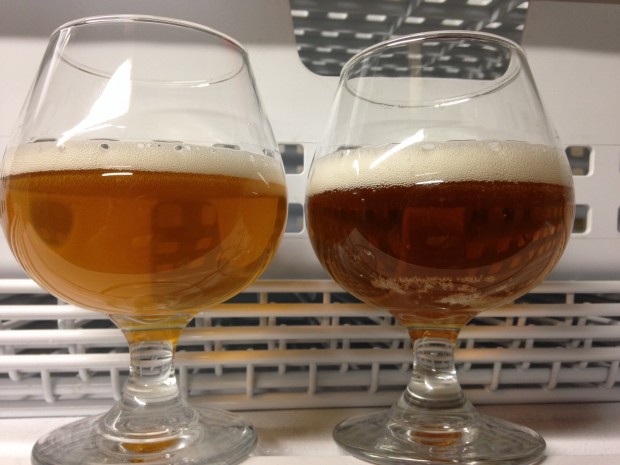 Maybe this isn’t always desirable in this style of beer but I sure do love to look at a crystal clear glass of my homebrew.

Update: After the beers came to an appropriate carbonation level and settled with some time, I feel that they are in fact a little dry. Not as dry as I would have liked, but closer than I originally thought.

I also noticed some distinct apricot flavors coming out of Mike's Best Saison which are really nice.

Have you brewed any saisons or tried any commercial styles you want to recommend? Let me know in the comments!