You are here: Home / Homebrew Recipes / Pumpkin Rye All Grain Recipe
FTC Disclosure: xBREWx.com is part of the Amazon Associates affiliate program, as well affiliate programs from other companies. That means if you purchase a product through links on my website, I earn a commission. I strive to make all my reviews honest, because that's the type of content I enjoy reading.

A Pumpkin Beer, Without All The Pie

I hope to dispel the myths that the best pumpkin beers are made this way. Personally, I love pumpkin pie, pumpkin ice cream, and pumpkin lattes. I'm not a huge fan of pumpkin beers. They are often too sweet, and don't actually taste like pumpkin at all. They taste like beer with added pumpkin spice. 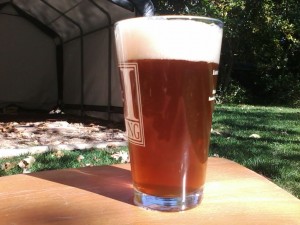 For me, that ruins the entire idea of using a pumpkin for flavor. I mean, pumpkins don't actually have a spicy flavor. In fact, I don't even know how the two got associated.

My hope for this Pumpkin Rye all grain recipe was to replace the typical “fall spices” with the spiciness of a rye beer. I also wanted to highlight the actual flavor of this famous fall gourd, and not create a sweet dessert beer.

I'm happy with the results. It's a highly drinkable beer, with enough unique flavor to distinguish it from not only the other beers in this category, but also from the original American Rye Ale recipe. This is a recipe I will be brewing again next fall, though with a few changes which I'll discuss below. I still have no desire to create yet another pie-flavored beer.

Note: There was not a lot of info available from Northern Brewer, which was very disappointing. The 1.042 Gravity was taken from here and here. Getting anywhere within this range will no doubt produce a good beer.

Ha! I can totally taste pumpkin! Well, maybe. The most difficult thing to do is to taste a beer when you already know what to expect. I have a feeling that if I didn't know it was a pumpkin beer I would not be able to identify the pumpkin flavor.

However, that being said, this beer was clearly made unique by the addition of pumpkin in the mash. The color is very orange – a lot more orange than your typical American rye. I also feel that it has a very distinct, almost sweet and smooth mouth feel that think the pumpkin contributed too.

It was slightly over carbonated in my opinion, but not enough to cause bottle bombs or gushers. I just feel that the beer could have benefited from smaller, tighter bubbles.

The rye flavor really comes though, and I feel that the rye and pumpkin pair well not only with flavor, but as a generally American themed beer.

The original recipe called for 5oz corn sugar for priming. It was unclear if this was the actual recommendation, or if they were just listing it as an ingredient. I browsed around and saw that some folks recommended as little as 2+oz and as much as 4.5oz. It was unclear what would achieve the amount of carbonation I was looking for.

I eventually settled on 4.25oz. I was going for a very light carbonation, and I think I could use a bit less. Next time I will try in the 3.5 – 4.0oz range and see what the results are like.

I sparged with way too much water and started with quite a bit as well, so my original boil was about 7.5 gallons. I also had an addition 1/2 gallon of wort set aside that I tossed in later on. I had quite a long boil, probably 90 minutes or more to reduce that amount of wort to 5 gallons for fermentation. I'm unsure how this affected the beer.

The target gravities for this beer were based on other American rye ale recipes found online (and linked to within this recipe). Unfortunately, Northern Brewer does not list this information in their recipes. Why they do not have it is beyond me.

Though I feel that there are pumpkin or gourdy flavors that can be tasted in the beer, there could be more. After mashing with the pumpkin I could clearly see a significant amount of pumpkin debris in the boil and in the fermenter, so this probably helped to keep some pumpkin character in each step of the brewing process.

Next time I brew I would like to put the pumpkin puree directly into the boil for 60 minutes and see what the results are like. I would also like to try it in the fermenter at one point. I will be sure to update the results, but it'll take a couple years, so don't hold your breath!

By weeks 4-6 I feel like the Pumpkin flavor, what little I started with, is starting to fade. I can't tell if this is a subjective thing, because I'm drinking it a lot, and forgetting my original impressions, or if it is actually losing that flavor, as with late-addition hops. I'll continue to test.

So far, this seems to be my most popular brew. I have had a lot of positive feedback on it. Who can or can't taste the pumpkin really depends on who you tell. Most have noted some kind of “sweet” or “other” flavor that they they can't put their finger on. Regardless, I think I can attribute the “good recipe” to Northern Brewer's kit, so I can't take credit there, but I'm happy that everyone likes it.

My original worries about overcarbonation may not be justified. It must have been just that one bottle, or maybe it was served too warm. Other bottles seem to be fine. I could probably pull back on the carbonation a bit next time, but only slightly.

4 Months Later: This is a beer that has just gotten better with age. It is very clear, very flavorful, and awesomely malty sweet. I think most of the “pumpkin” flavor has drifted off, or at least I'm out of the honeymoon phase of having my first pumpkin beer. Still, this is the first of my beers that I can really pound back (usually one per session is enough for me). I took an interesting photo of it the other night while tasting with my friends. Notice the clarity on the 1st, 2nd, and 3rd pour (starting back to front). 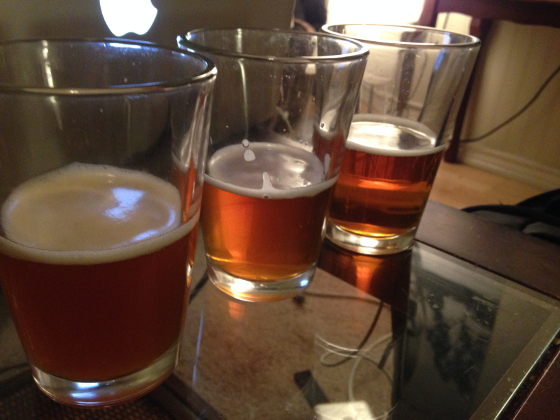 Pumpkin into the fermenter

Pumpin in the boil