You are here: Home / Craft Beer / Off Flavor Taste Test #2: Acetic Acid
FTC Disclosure: xBREWx.com is part of the Amazon Associates affiliate program, as well affiliate programs from other companies. That means if you purchase a product through links on my website, I earn a commission. I strive to make all my reviews honest, because that's the type of content I enjoy reading.

As a continuation of my comprehensive taste test kit I bought from Siebel Institute, last weekend I conducted off flavor taste test #2 and #3. If you missed #1, acetyldehyde, think…raw pumpkin and fresh cut grass. But today we are going to be talking about acetic acid, which is probably much more easily identifiable, but harder to get rid of!

Just be careful if you bottled it, as it may continue to ferment in the bottles. Bacteria can eat sugars that yeast cannot, but they will still produce carbon dioxide as a bi-product, causing bottle bombs.

When I cracked open bottle #2, I was surprised at how pungent the smell was. In fact, as I poured the doses into my beer samples, I spilled a bit on my fingers and had to wash my hands to get it off before drinking because I just couldn't get rid of the smell.

The smell was not exactly vinegar, though it was quite close. there was something less acidic and more sour to it. This is why I listed “sour feet” as a flavor comparison. That flavor didn't really show up in the beer, but the smell of the pure chemical reminded me of taking off my socks after an all day hike in the summer time.

I wanted to keep a constant for the testing sessions, so I used another bottle of Firestone Walker 805. TBH, I'm not a big fan of this beer, but the light flavors work well for the “easy” tasting test. The other two I chose were Slow Ride from New Beligum for a hop forward test, and Fireside Chat from 21st Amendment for the challenge. It's a higher ABV, strongly spiced winter warmer. 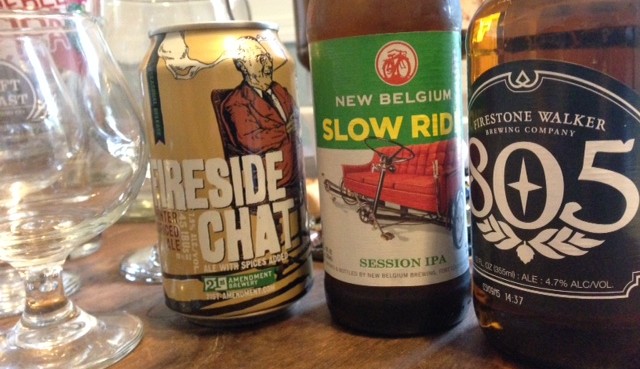 Acetic acid was slightly harder for me to identify than that Acetyldehyde. I think this is because I really do enjoy sour beers and have grown to have a fondness for that bit of acidic character. However, the tartness achieved by sour beer should not be confused with vinegar and sour feet! Also, it's not appropriate for all styles, traditionally speaking of course. But nowadays, with brett IPAs, sour black ales, ales and various mixed or wild yeast cultures, I guess anything goes, and it really depends on what you are trying to achieve.

Have you ever had a beer sour on you? What did you do and how did it work out?