You are here: Home / Craft Beer / Is The Dogfish Head + Sierra Nevada IPA Glass Worth Your Money?
FTC Disclosure: xBREWx.com is part of the Amazon Associates affiliate program, as well affiliate programs from other companies. That means if you purchase a product through links on my website, I earn a commission. I strive to make all my reviews honest, because that's the type of content I enjoy reading.

Since I've finished a lot of indoor projects on my new house and my kitchen is pretty much done, I've been buying up specialty beer glasses. One of these that I was especially excited to get was the IPA glass that Dogfish Head and Sierra Nevada created with Spiegelau.

Dogfish head and Sierra Nevada are two of the highest quality, biggest, and most creative craft breweries out there. That's a given.

Until recently, when I purchased a set of 5 specialty beer glasses from Amazon, I had no idea who Spiegelau was. I guess they're kind of a big deal in the glass industry, because Rogue and Left Hand Brewing also designed a Stout Glass with them.

Actually, I just ordered on Amazon, so that review will be coming soon!

What The IPA Glass Is Supposed To Do

IPAs are divisive. Personally, I love them. Actually, I'm subscribed to several IPA clubs, so that I can get fresh new IPAs delivered each month via mail.

There are three basic things the IPA glass is supposed to do.

The science behind the design says…

The ridges on the bottom of the glass are no doubt one of the main focal points of conversation. As one friend put it, “I think my wife has one of those in her dresser drawer.” But these ridges help to agitate the beer on the way up and down the glass as you drink, creating more hop aroma than smooth edges of a normal pint glass would.

The bowl shape that tapers inward traps hop aroma, which is then pushed toward your nose as you tilt the glass. This is in contrast to other types of wider-mouthed glasses which let a lot of the hop aroma escape and also allow you to simultaneously smell other things from your surroundings.

Lastly, the thin walls of the glass absorb less temperature from the beer meaning that it's going to keep your beer colder for longer. Normally, unless a glass is kept at beer serving temperature, there's going to be an immediate heat exchange, warming your beer a few degrees at the beginning of a pour.

So, does it actually work?

Yes! Most of what this glass intended to do, it actually does. Check out the pictures and some notes below.

You can see from the images below that tilting the glass back and forth as you drink it really does stir up the beer. This happens to some degree in any glass, but it's exaggerated because of the unique shape here. If you have a full pint, it doesn't do it so much, but the more you drink, this action becomes more and more obvious.

This works out perfectly because the large head from an initial pour will last about half way through a pint, and the dynamics of the splashing beer will carry you all the way to the end! 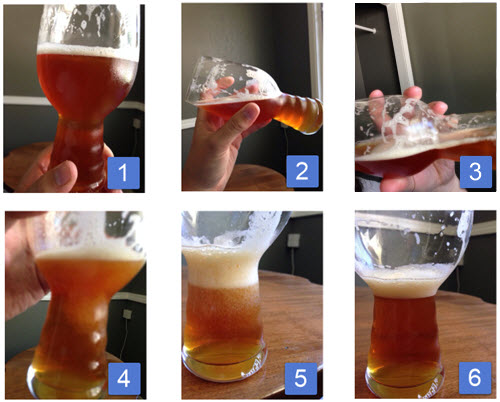 Ok, so I can't capture my perception of hop aroma in a in a picture, so this part might be a bit biased. It may very well have been a placebo affect, but I did feel that I was able to more effectively smell the hops in my beer.

By big ‘ol schnoz fit right into the glass, and with each drink, I got a big blast of hops along with it. I tried to compare this effect with a regular pint glass, but the “official” results were inconclusive. My personal bias says that this feature gets a thumbs up 🙂

This was an interesting experiment. I used the needle thermometer from my brewing supplies to measure the temperature of the beer as I drank it. Or, at least, that was the idea.

I actually forgot to measure the original temperature because I was busy taking pictures and drinking beer. Both beers were bought at the same time, and refrigerated for the same time.

About 5 minutes into drinking I took the temperature of each.

From my results, it seems like the initial pour sapped out a lot of temperature from the beer, causing an immediate 2 degree difference near the beginning. This may have been a larger difference right at the beginning of the pour because shortly thereafter, both glasses reached the same temp.

I'll have to test this again (yay!) because other people have gotten results that confirm the temperature claim. Those temp jumps also see quite large, so I'll have to check my thermometer, I don't know if this is normal. Ambient temperature was about 80 degrees.

*note: When I first received pair of glasses, I thought that I had ordered from the wrong company! They felt thin and cheap, especially in comparison to the sturdy feeling beer glass set I bought from Spiegelau the week before. It turns out that the thin walls are an intentional feature, and after frequent use, I got used to the delicate feeling of the glasses.

Something that no one seems to mention is the amazing ability of this glass to maintain a decent head all the way down the glass as you drink. In the images below, you'll see the progression of beer as I drank each.

Granted, one was a Stone session IPA, and one was Anchor's IPA. You can see by the color alone that they were different beers, so that may have affected this comparison to some degree. But check out the pics below and can see the mechanics of how this really cool feature works.

In an IPA, a lot of the aromatics come from aeration of the beer, and the bursting of the bubbles created by aeration. Basically, a bit of head on an IPA gives you more hop sensation.

For any craft beer drinker, and even more so for an IPA fan, these are a must have in your cabinets. While the difference between drinking in a specially crafted glass versus whatever's on hand may be subtle to the casual beer drinker, for even the mild enthusiast, you'll notice a difference.

You can get your own set of 2 on Amazon for $19.50 + free shipping for those with Amazon Prime. They also have sets of 4, 6, 12, and some special ones with the Dogfish Head logo etched on the side. You could also buy them as part of a set with other styles of glasses.

I just found out that this glass design was ‘inspired' by, not ‘invented'. Apparently this style of wine tumbler has been around for a while. The IPA glass does have different shaped ribs, and a wider bowl, as well as a larger capacity, and I can't comment on the thickness of the wine glasses. Yes, it's a unique glass designed specifically for IPAs, but no, it's not a one of a kind. Disappointing, but I still love my glasses and use them all the time!

Personally, I prefer some of the ribbed shapes below. The 4th one is my favorite – it looks a less like a…well, you know.