You are here: Home / Craft Beer / Is The Rogue + Left Hand Stout Glass Worth Your Money?
FTC Disclosure: xBREWx.com is part of the Amazon Associates affiliate program, as well affiliate programs from other companies. That means if you purchase a product through links on my website, I earn a commission. I strive to make all my reviews honest, because that's the type of content I enjoy reading.

As part of my specialty beer glassware review series, I bought the official stout glass that Rogue and Left Hand did with Spiegelau recently. I was really excited to try this glass because dark beers have always been a favorite of mine, and I had such a good experience with the IPA glass that I wanted to try this one out!

At a first glance, you might think, “Wow, that's basically an IPA glass without the curves at the base.” But although the general shape of the glass is similar (narrow base, wide bowl, tapered to mouth), when you compare the glasses side by side, the difference becomes more obvious.

Fill them with their appropriate beer styles, and the difference becomes even more accentuated. 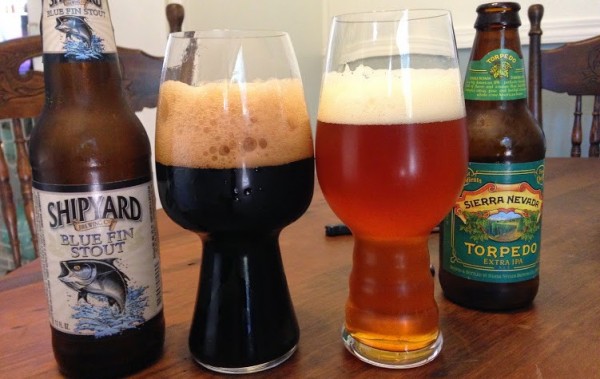 The Story Behind The Stout Glass

There's a lot less information out there about the stout glass. It's possible that it was just a kind of marketing flop that never really got the glass the exposure it needed to catch on. Dogfish Head had a documentary series on Netflix so they are at least somewhat accessible to the general public.

Also, stouts are just not very consumer friendly. They generally aren't beers that you can pound back, and they don't have the “bro” culture that IPAs have. Last night I did a stout tasting (link coming soon) and when I went to my local Bevmo, I was only able to find four types of stout (non-imperial) in the ENTIRE STORE (not including Guinness).

Still, it was crafted by Rogue, a company that's committed to its beers, so I have to believe that it was designed with knowledgeable craft beer drinkers in mind. Here's a video that talks about the creation of the glass.

What's It Supposed To Do?

I'm assuming a bit that many of the features should produce similar results to the IPA glass. The thin walls should keep the beer colder due to less heat transfer. The wide bowl and narrow base should provide some splashing action to cause a consistent head. Perhaps most importantly, the bowl and mouth shape should create a “snifter” effect, trapping aroma in the glass and pushing it to your nose as you drink your beer.

The great part of this glass is the large bowl that can hold an entire beer, PLUS a large amount of head. Too much foam can mean you have to wait an extra few minutes to drink your beer, but the bursting of bubbles really creates a wonderful aromatic effect. This is especially noticeable with a glass large enough to fit your nose in it.

However, I have not seen the excellent head retention results that I achieved with the IPA. Stouts are simply different beers, and I discovered during my stout tasting that they just to seem to be able to hold a decent head for long.

Even with an over carbonated Blue Fin Stout, after about 10-15 minutes of drinking, no amount of natural splashing in the glass would bring back the head. The lightly carbonated English style stouts didn't stand a chance.

I discovered that with this glass shape, swirling the beer to regain a bit of the foam was possible. This effect was more obvious with the more highly carbonated American stouts – with the English ones I really had to get vigorous about it which seemed kind of sill after a while.

To be honest, the grip on the glass was a bit awkward. I wasn't sure if I should be grabbing it by the base, the bowl, or somewhere in between. In the video above you can see that the head brewer at Rogue is gripping it by the base of the glass, much like you would a stemmed wine glass.

However, I feel that stouts are a more robust beer, and deserve more of a sturdy grip. I found that a having my pinky/ring fingers at the base (ring finger just supporting the bowl bottom) and middle/index finger wrapped around the bowl was the most comfortable grip for drinking.

Check out some of the grip styles I experimented with!

The look was certainly a lot easier to get used to than the IPA glass. The stout glass is wider and shorter, creating a sense of sturdiness. I feel this is very appropriate to full bodied, dark, roasty, and strongly flavored beers that modern stouts are.

What I found was really interested was the color effect on the glass. Stouts can be extremely black, and with a full pour, it almost looks like the glass has been painted black because not a single stream of light gets through. Look at this picture below.

You might thing this image was created in photoshop (maybe it was) because the stout looks so black it almost makes the picture look artificial. However, I was able to recreate this effect in real life! It's certainly not going to change the flavor of the beer, but it was pretty interesting. I think this was in part due to the thin walls of the glass.

I wrote quite a bit about head above, but wanted to add one more thing. With dessert stouts, chocolate stouts, sweet stouts, milk stouts, and any other kind of creamy/sweet beer, you are really going to be able to savor those flavors.

I did a side by side comparison drinking from the bottle and from the glass, and the difference was obvious. Without proper aeration and a way to trap those volatile aromatics, the beer drinking experience was very different.

Side by side with a regular pint glass the difference was less obvious, but still there. The most noticeable effect was being able to over pour with a large creamy head and still be able to til the glass far enough to drink real beer without getting a face full of foam.

The Rogue + Left Hand stout glass is another fantastic addition to my beer glassware collection. For any craft beer enthusiast or stout lover, it's a great buy. If you are a bit OCD like me and absolutely “need” the correct beer glass for each style, it's a MUST HAVE. I love this glass and would like to see it gain some popularity in the future.

You can get a pair on Amazon for $20 with free shipping. Considering that it costs about $10 per glass and you can use it hundreds of times, it's like paying a few pennies extra to enhance the flavor and aroma of every single stout you drink after this moment. Who wouldn't want to pay a few pennies for better beer?