You are here: Home / Craft Beer / Tasting Notes for West Coast (American) IPA: Green Flash, Dogfish Head, Red Hook, Stone
FTC Disclosure: xBREWx.com is part of the Amazon Associates affiliate program, as well affiliate programs from other companies. That means if you purchase a product through links on my website, I earn a commission. I strive to make all my reviews honest, because that's the type of content I enjoy reading.

I was pretty excited to do my IPA tasting for two reasons. One, my ESB tasting  last week went really well and I think I learned a lot.

But the biggest reason is that hops are a huge part of brewing craft beer (and beer in general), but I still can't identify the various hop flavors very well. The difference between floral, grassy, citrusy, earthy, and other hop flavors is still a mystery to me.

Because west coast IPAs are so big on hops, I figured this would be a great way to not only compare some popular brands' recipes, but also to compare hop usage and really think about the flavors/aromas in each beer. Oh, and because I'm actually in California, I was able to find some really fresh examples.

Remember that in hop forward beers, freshness is key! You can lose as much as 25% of your IBUs (international bittering units) in just 12 months of improper storage, and the hop aromas die off even quicker.

See what the BJCP style guidelines say about American IPAs 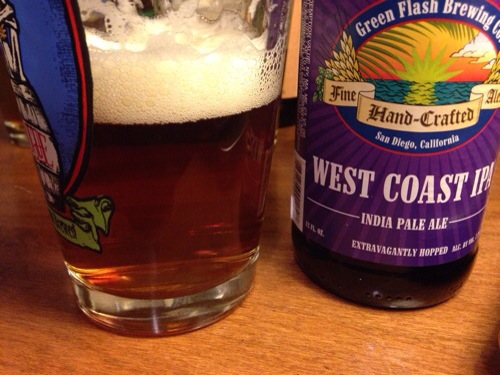 Apparently Green Flash “invented” the West Coast IPA as we know it. I don't know if that counts as inventing the “American IPA” category, but anyway, they were pretty instrumental in developing this style. I was happy to find this one to try even though you can get it pretty much anywhere in California.

I think they may have discontinued this beer because I no longer see it on their website, and on Untappd it's listed as (-2013). The double IPA may be it's replacement. Feel free to comment on this below.

Taste: citrus hops, medium body. I felt the hops here a little bit numbing (this was beer #1). There was also a nice amount of malt to carry the hoppiness of the beer. Not all beers did this very well!

From The Website/Bottle: This West Coast-Style India Pale Ale is extravagantly hopped, full flavored, medium bodied and copper colored. A menagerie of hops is combined throughout the brewing process to impart specific characteristics. Hops used include Simcoe for a unique fruitiness and grapefruit zest, Columbus for strong hop pungency, Centennial for pine and citrus notes, and Cascade for floral aroma.

The hop profile on the Green Flash was much more enjoyable than any IPA in this group. It seemed more complex than the others and there was enough maltiness to carry the hops over a longer period of time. Others seemed to drop that hop “flavor” while just the bitterness persisted. 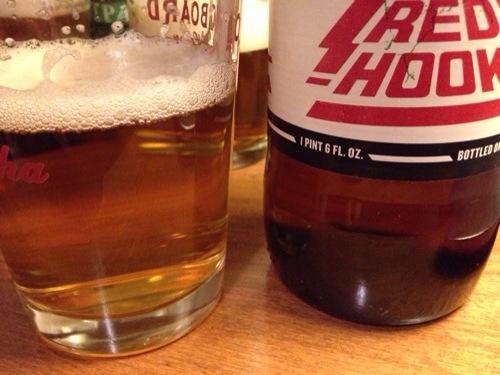 Smell: not much hop aroma, has a honey aroma to the malt

Taste: almost no hop taste. I could detect a bit of honey flavor that reminded me of the Fullers beer from the ESB tasting. I had a really hard time tasting the hops in this one, and would not guess that it was an IPA. I drank some water between beers, but my palate may have been numbed from the previous beer.

I've had Long Hammer before and thought it was pretty hoppy, but that was over a year ago before I knew anything about beer. I actually didn't finish most of the Long Hammer last night and drank some of it with lunch (yes it was still carbonated) and could detect more hops with a fresh palate. It was still pretty mellow for an IPA, and also had the lowest ABV of the bunch.

From The Website/Bottle: The generous addition of hops both during and at the end of the fermentation process (dry-hopping) gives our India Pale Ale its characteristic bitterness and piney citrus aroma and flavor. The medium body, crisp finish, and moderate alcohol and IBU levels makes this one of America’s most drinkable and best-selling IPAs.

After my second round of tasting today, I can see that it did have hoppy character, but it was so mellow compared to the others that I just couldn't identify it within the group. It definitely was crisp and clear, and would be a great entrance beer for someone that wasn't a hop head. For any experienced heavy-hopped IPA fan it will be a disappointment. 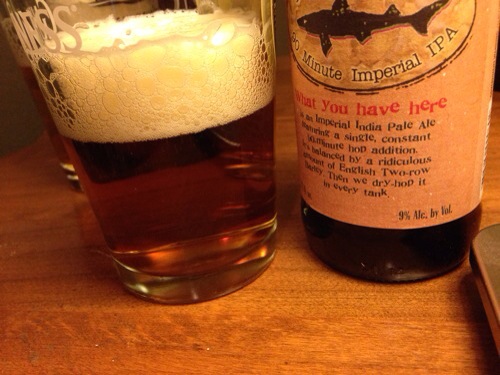 Oops, I screwed up on this one. I meant to buy the 60 minute IPA which is the regular IPA. This is actually a double IPA!

Smell: Again, the hop aroma was hard to detect with the smell. I'm not sure if my nose was stuffed up or something else was going on with these beers because fresh hopped beers are usually pretty obvious.

Taste: Obviously the taste was going to be a bit different from the others. There was a very different hop taste from Green Flash IPA. It wasn't just the comparison of more or less hops, but the actual flavor of the hops was different.

It was much maltier with a lot more body. I would say sweet, but not cloyingly or overly sweet. The malt and hops were perfectly balanced, and it was easy to see why it's such a popular beer.

From The Website/Bottle: Esquire Magazine calls our 90 Minute IPA “perhaps the best IPA in America.” An imperial IPA best savored from a snifter, 90 Minute has a great malt backbone that stands up to the extreme hopping rate. 90 Minute IPA was the first beer we continuously hopped, allowing for a pungent — but not crushing — hop flavor.

After reading some things online, I saw some descriptors that I could agree with: brandied fruitcake, raisiny, citrusy, chewy

This was the beer that I ended up savoring the most. As the beer warmed and my buzz kicked in, there was a lot to explore in this glass. I think the best discovery was the “chewiness” of the beer. That may seem odd to a non-beer drinker, but it's a quality, as far as I understand it, that describes the amount of body in a beer. I found myself actually doing a chewing motion with my mouth as I drank!

There were some other qualities in the beer that I couldn't identify or put words too. I was pretty smashed by the end of the night, but looking over my notes, the last thing I wrote about the 90 minute IPA was “Really fucking delicious.” 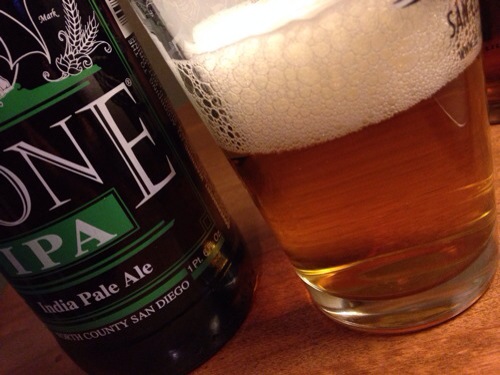 Stone is from SoCal and is an awesome brewery. If you ever have the chance to stop by, you absolutely have to go to their brewery for a couple of beers. They have huge gardens and an insane number of beers to try, in just about every style you can imagine. 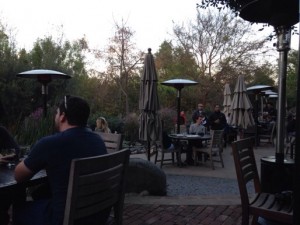 Taste: strong citrus hop flavor. dry. not much malt to speak of, but not offensively hoppy. Solid IPA taste. less body than the others. This was definitely a hop-forward beer, and it did not have the malt to back as with the Green Flash. That's not a negative thing, but it was just a very different beer.

To be honest, this is the type of IPA I'm used to drinking.

From The Website/Bottle: Look up “hops” in the dictionary and you’ll see a picture of Stone IPA! “Dry-hopped” for an extra two weeks, this unique process gives our IPA its bountiful hop aroma and rich hop flavor. A full 70+ IBUs (International Bitterness Units) creates this beer’s crisp and refreshing bitter character.

I would agree that Stone was probably the most crisp of all of the IPAs, and would be best suited to a host summer day rather than a beer session into the long night. I know I always comment on the douchebags on RateBeer, but I noticed quite a few people quoting “spicy, piney, grapefruity, with some floral and citrus tones”.

So I looked up the hop flavors online (the hops are listed on the Stone bottle, another great quality of Stone) and guess what they said: Chinook= spicy, piney, grapefruity centennial = medium floral with citrus tones. Basically, people just copy what they look up and try to seem smart. I hate it, and that's why I use Untappd.

I thought that this beer opened up to some unique flavors as it warmed up even though it seemed to go a bit flat pretty quickly. Some of the hops tasted piney and maybe even a bit fruity.

But even after all these beers I can't identify citrus vs floral vs earthy vs spicy. I would have guessed citrus flavored hops for Stone and left it at that, but now they want me to pick up spicy and piney with citrus and floral tones? Nope, not yet. Maybe with practice.