You are here: Home / Craft Beer / Belgian Beer Glasses – A Collectors Heaven Or Hell?
FTC Disclosure: xBREWx.com is part of the Amazon Associates affiliate program, as well affiliate programs from other companies. That means if you purchase a product through links on my website, I earn a commission. I strive to make all my reviews honest, because that's the type of content I enjoy reading.

It seems to me that there are just as many types of Belgian beer glasses as there are Belgian beers. I sat down to write this post I thought I bought a Belgian tulip I was psyched about, and thought I could write a quite post about a few of the styles of glasses I had seen over the years.

What started out in my mind as one or two styles, quickly turned into screenshot after screenshot of unique shapes, sizes, and appropriate beers to pair with them.

So I’m going to attempt to break it down as I see it, and help you decide which glassware is best for the brew you’ve chosen.

Although there are a wide variety of riffs on what I’ve deemed the 3 main styles of Belgian beer glasses, if you look at what type of beer is meant to be drunk, it becomes easier to divide them into these two categories.

Therefore, you are going to need a glass to contain that foamy beast! Though not as large as a weizen glass, tulip glasses allow for beer AND head to coexist in the glass, and still leave enough room for you nose to fit in and enjoy the aromas of these yeast dominant beers.

One style of glass that I was tempted to put in it’s own category was the Belgian ale glass.

It’s quite a bit larger than the typical tulip, but it looks similar enough and is used for similar styles beers. I own the one you see above, and it’s quite versatile for both Belgian ales and doubling as a snifter. I got it as part of the Libbey craft beer glass set which was quite a nice (and inexpensive) introduction to different styles of glassware available for the increasingly wide range of craft beer out there.

High gravity beers have much less foam, and it what foam there is doesn’t last long due to the high alcohol content in the beer.

To be honest, I haven’t had much experience drinking from chalice, and this was quite new information to me that I discovered while researching these Belgian beer glasses.

Since I moved earlier this year I’ve been collecting all kinds of awesome specialty glassware including the TeKu, the IPA glass, the Stout Glass and a few other novelty items. I had never even considered buying a chalice because they always had a logo of some brewery I had never heard of. It just didn’t interest me. Call me weird, but I like my specialty glasses sans-logo, and pint glasses branded!

But as I began cataloging the different styles of chalice glassware, it became clear that each brewery has its own style of goblet. If that doesn’t seem quite like surprising revelation, consider that in the US, most craft breweries will all have the exact same style of pint glass, and just slap their logo on it.

Yet, not all glasses fit into a category as neatly as I’ve organized them (pity). Orval is a trappist ale, and although it doesn’t quite hit the ABV of a high gravity beer, it’s served in a rather well known chalice. Perhaps that due to it’s status as a world renowned beer.

There are other specialty glasses like the Leffe stemmed glass, the Hoegaarden hexegonal glass and the Kwak glass + wooden stand. Some brands even server their beers in old school flutes. 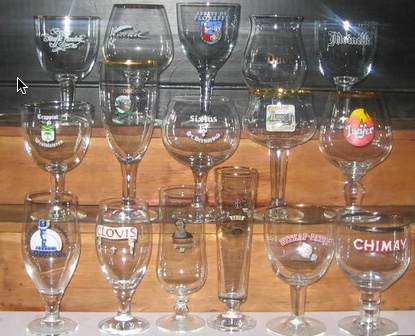 If you consider that there are some Pilsners that originate in Belgium, you could also consider some Pilsner glasses (which also have a variety of shapes and styles).

Altogether, these can form quit the collection, as you can see in image above. Careful if you are one of those people that has to have “every kind” of something, be it Beanie Babies, Pokemon, or whatever. Can you own one of every kind?…Can you really try one of every saison?

Personally I’m quite happy with one tulip, my Belgian ale glass, and perhaps I will buy a chalice at some point but I still do not like those labels!

The tulip featured in this photo is a beautiful glass from Libbey that I purchased on Amazon. If you want to get the same one here NOT part of a set, so you can just get the single glass. They also offer them in sets of 4 and 12. 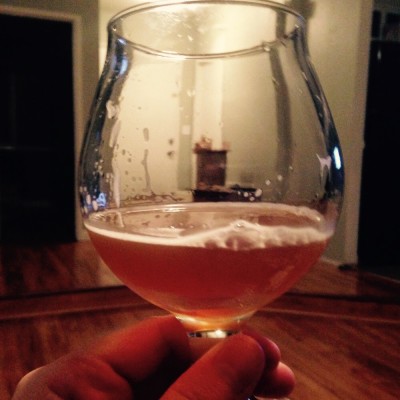 In my searches in the past few days, I've found a few interesting looking items, some of which I found were extremely difficult, if not impossible to buy. Part of this rarity is the fact that many local breweries only sell their glassware locally. Some are part of special promotions. Some area available, but only from select websites that do not advertise much, and it's pretty hard to find that “tall skinny Belgian glass” if you don't know what it's called!

The most notable one I discovered was this Fantome crooked stem tulip which looks amazing, but is no longer in product, and illegal to reproduce! You can check ebay, or even sites like Ratebeer and Beer Advocate where people buy, sell, and even trade glassware, but don't be surprised if you don't find any deals. Most beer lovers are quite aware of what they have, and if they aren't, there's usually someone there tell them. 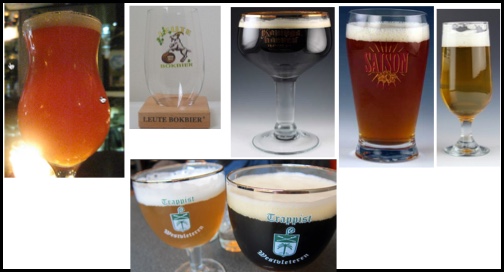 Some of these images I found on peresonal blogs so I have no idea where the glasses come from. The 3 on the top right can be found on truebeer.com which has a ton of other nice glassware as well.

What was your favorite glass you saw on this post?