You are here: Home / Homebrew Recipes / Orange Clove Witbier All Grain Recipe
FTC Disclosure: xBREWx.com is part of the Amazon Associates affiliate program, as well affiliate programs from other companies. That means if you purchase a product through links on my website, I earn a commission. I strive to make all my reviews honest, because that's the type of content I enjoy reading.

The idea for this orange clove witbier came to me while thinking about what type of winter holiday beer I was going to do. I had just finished my pumpkin rye for the fall, and needed something for winter. I wanted to do something spicy and aromatic. When you were kids, did you ever stick a bunch of cloves into oranges and hang them around the house as air fresheners during Christmas?

We were sitting around discussing what type of beer that would go good with. I tend to aim for lighter beers with fragrant additions, so I don't have to overwhelm the beer to get the flavor to come out. I had never brewed (or even had) a Belgian Witbier at that point, but my friends described it as fruity, spicy, and clovy. It was the perfect match!

Of course it seems like every brew I do presents a new set of challenges, and this time was no exception. It's still in the fermenter at this point, so I will continue to add to this post as things progress. Luckily, it should be a pretty quick fermentation, unlike my recent chocolate bock (turned dopplebock) which is still bottle conditioning, now 3 months after the original brew date!

If you've done an orange zest beer before, brewed with cloves, or have experience with wits, let me know in the comments below! Oh, and the base beer recipe I used for this one is the Witbier from Midwest Supplies. 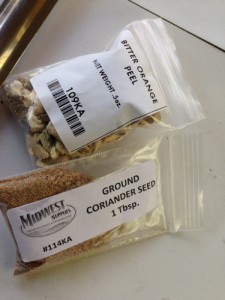 I brewed this in December, so ambient temperature was about 59°. I wanted to start the mash at a higher temp than usual, but overshot. Strikewater was about 168°, so adding the grain brought it down to 158°. I stirred the grain for about 10-15 minutes with the top open to bring the temp down to 154°. After an 80 minute mash, the temp was 148°, so there was much more significant temp loss than I'm used to.

I'm not sure how these numbers will affect the final product, but they are at least within a reasonable range and I don't think I'll be able to notice anything.

I eneded up with more beer than planned, which I think is from a “normal” boil time rather than my usual extra long boils. I used 6 gallons of strikewater and about 2-2.5 gallons for the sparge. This is standard procedure for me, but as I mentioned in my top 4 homebrew mistakes (link), volume of wort is a common problem for me.

The resulting original gravity was a little lower than planned as a result, but not by much.

I pitched the yeast at around 74°-75°. Earlier in the day I soaked the zest from two small oranges and two whole cloves in a bit of vodka for a few hours and added them to the fermenter. The peel didn't flow well through the funnel into the fermenter, so I had to put it in by hand. My hands had previously been cleaned with Starsan, but this could be a possible source of infection if my hands were not completely free from bacteria. 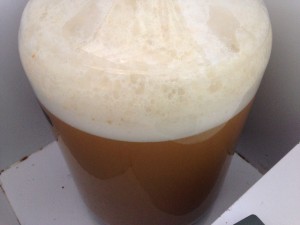 By the morning (around 12 hours later) the temp was down to 65° and there was a significant amount of yeast activity. Luckily I was using a 6 gallon fermenter, otherwise I would have had a lot of blowoff to deal with.

The orange zest aroma is very obvious, and smells great. However, it may be too powerful for the beer. I wanted something a bit more subtle, but of course it's too early to tell, and flavors like these can mellow out. I cannot smell the cloves at all (that's a good thing), but I will have to taste the beer next week to see about maybe adding another clove or two. Only two cloves seems way few, but I'm going off the advice of various beer forums.

I'm also trying to ferment at a lower temp to bring out some of the clove flavors from the yeast as opposed to banana flavors. I know I read or heard that somewhere, but can't find the link. Maybe I dreamed it up, but for now, I'm convinced that this is the way to go, so I'm aiming for low 60°'s.